Whenever a file is opened in Windows the operating system checks the file association of that file type/extension against a list of known utilities setup to run that program. For example a .doc file may open in MS Word, a .jpeg an image viewer, a .txt notepad and so on. By modifying these association values in the registry, we are able to call an arbitrary program when a file with the given extension is opened.

In the below example we have gone ahead and created our very own file extension ‘.raiju’. Within this we have set the default command to run as calc.exe whenever a ‘.raiju’ file is opened. We have also placed an enticing file called YummyBurgers.raiju on the desktop which is nothing more than a null byte file. 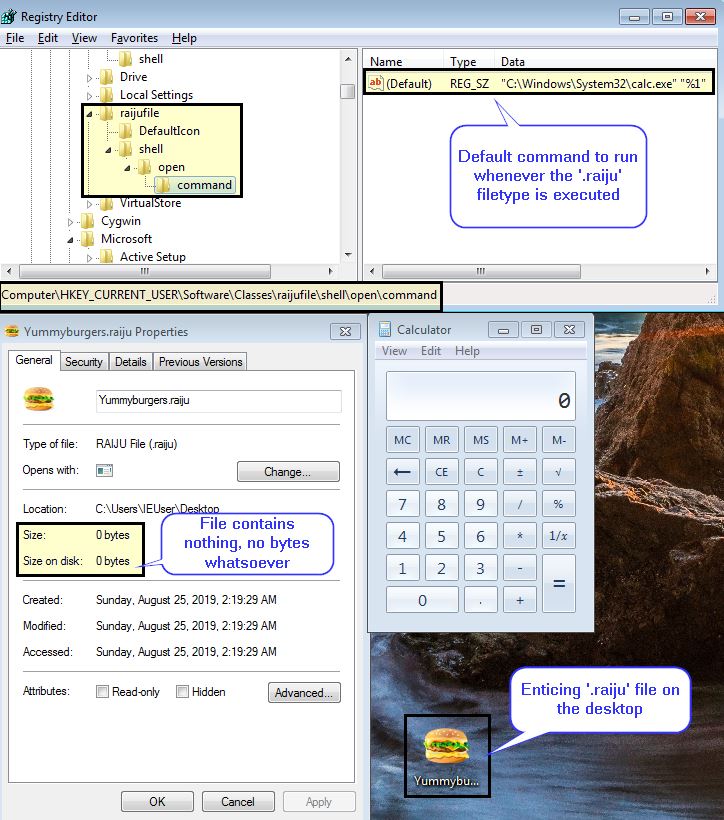 By running this blank file we spawn calc.exe on this host which can be an excellent way of maintaining persistence.

This abuses system features so isn’t easily detectable; however, we can see through Sysmon that event type 13 reveals this to us.

*Clarification - later versions of Sysmon allow us to define a rule name. This has been used as a way of mapping this to the MITRE Technique in our Sysmon configuration.

The end result is that we have a null byte file which essentially acts as a bootstrapper to execute ‘malware’ on this machine.